On October 6, 1993 Sisters Mary Saponara, Sheila Tague and Theresa Molchanow, MSC flew to Mexico City, Mexico for a new life of service among the people of San Ramón Nonato Parish. It was a challenging beginning and a time of generative energy for mission. MSC Sisters took on the ministries of catechesis for children and adults, preparation of catechists, pastoral attention to the sick, preparation of Eucharistic Ministers, and a food cupboard and parish-based missions.

In the years that followed, Sisters Catherine Cellini and Marie Clark also shared in the mission of Mexico and Mexico native Sister Ma. Remedies Chávez Arreola, MSC was a teacher and spiritual director for the Laity of the Chevalier Family until her assignment to Perú in 2018. Sister Mary Saponara had sole responsibility for parish catechesis until mid-2018 when life took her to the U.S.A.

Throughout our twenty-seven years in Mexico, our mission continually evolved in response to need. In 1999 we discovered that an elderly and infirm parishioner, Rosa Bojorguez, had been sleeping under the steps of an apartment building. Her situation inspired MSC Sisters to create the Posada of Saint Joseph, a gratuitous shelter for homeless, elderly women. The Posada began the following year under the patronage of Saint Joseph and a vision born of our charism. It was made possible by our MSC leadership and the generosity of many benefactors who put their faith in us.  During the MSC Sisters’ twenty-year commitment to the Posada, it developed into a ministry of hospitality and personalized care for as many as 13 women.

By 2018, MSC Sisters recognized the necessity of leaving the Mexico mission to other capable hands. It was hoped that the Posada of Saint Joseph could be donated to a Congregation of Mexican Sisters and that Incarnation House (our convent), located five short city blocks away, could be sold.  By late 2018 this had not materialized, so in 2019 Sister Theresa began the search for a Congregation of Religious Women who could accept the ministry and administration of the Posada of Saint Joseph.

Months of dialogue and discernment with one congregation and then another, in addition to an advertisement posted in the bi-monthly bulletin of the Major Superiors of Religious Women and Men of Mexico, produced nothing hopeful. Then, as Providence would have it, an opportunity to address the Major Superiors at one of their regular meetings regarding the proposal for the Posada was offered. Communication began with a third Congregation just as the Covid-19 Pandemic was beginning to be taken seriously in Mexico.

These Sisters, Missionary Catechists of the Sacred Hearts of Jesus and Mary, were enthusiastic from the start; not only about accepting responsibility for the Posada, but also, about buying Incarnation House. Sister Felisa Nava Lugo, Superior General, and her Sisters came to believe that the two locations could be a means for fulfilling their mission while responding to the mandates of their General Chapter. They felt challenged to trust God, just as their Foundress had done. On April 30, 2020 the Missionary Catechists gave their confirmed “Yes,” accepting the ministry and property of the Posada of Saint Joseph! The Sisters were overwhelmingly supportive of the new ministry and expressed their awe and appreciation for the generosity and trust of the MSC Sisters.  Three months later, the Missionary Catechists had amazingly reached 80% consent of their entire membership for the purchase of Incarnation House.

What the Sisters would receive were two houses, well-equipped and in excellent condition. By mid-August, two senior Missionary Catechists arrived at the Posada to stay. Neither Sister had any nursing experience, so they began a time of learning, orientation and community-building. Two months later, Sister Theresa moved out of the Posada and into Incarnation House, still remaining accessible to the Sisters.

During the long months of the Covid-19 Pandemic, two houses for assisted hospitality had closed in the vicinity. Located in a poor area of Mexico City, the Posada was needed more than ever!  The legalities for the donation and sale of our two properties became more difficult because all government offices had been closed indefinitely. Such negotiations for Religious in Mexico are more difficult due to additional requirements. The government of Mexico must approve any exchange, acquisition or sale, of property for Religious Associations and at least 50% of the Association’s total membership also must agree to it.

Reaching the desired goal seemed near impossible. Downsizing at Incarnation House alone might have been overwhelming. Saint Joseph was, however, in charge!  “Saint Joseph was the friend and guardian of Jesus and Mary,” said Father Jules Chevalier. “Let us place all our houses, now and in the future, under the outstanding care of St. Joseph.” From the start, we showed every confidence in Saint Joseph and in God who had begun this good work and who would bring it into its uncertain future! 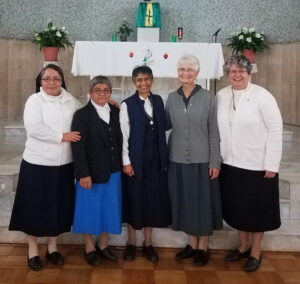 Three Missionary Catechists of the Sacred Hearts of Jesus and Mary signed papers with Sisters Theresa and Mary (right) to finalize the transfer of the MSC Mission in in Mexico City in 2020.

Sister Theresa had, all along, the support of good people who knew Mexican Law, trusted her faith and believed in the work to be accomplished. These generous friends included María de los Ángeles Concepción Venegas Ortiz, Doctor Antonia Noemí Hernández Pérez, Medical Doctor and Legal Representative, and Lawyer Licenciado Carlos Alberto Lozada Vega. Their inspiration, support, guidance and expertise were irreplaceable. Amidst innumerable setbacks and changes in the whole endeavor, everything necessary was able to be resolved in record Pandemic time!

On November 18, 2020, during Sister Mary Saponara’s final visit to Mexico, all necessary legal documents finally were signed. November 30 marked the last exchange of responsibilities between the two Congregations when Sister Theresa delivered the keys and closed the door of Incarnation House behind her. That evening, her plane touched down at the Newark Airport. For the last three Sisters of the Mission of Mexico – Mary, Remedios and Theresa – one door had closed and another would be opened!

When Father Hubert Linckens wrote his advice to Sister Dominica more than a century ago, he had no way of knowing how much his words would continue to speak to every MSC Sisters’ heart through the years. He had written: “What God Wills!  How God Wills!  For as long as God wills!” Thank you, Father Founder!