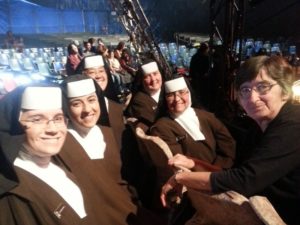 Sister Dorothy Fabritze (right) invited sisters from a local convent to a November circus performance in Palmdale, Calif. She has spent 18 years in the Catholic Church’s circus ministry.
Gloria Hillard for NPR

Any good circus has clowns, the acrobats and the high-wire acts. But chances are you haven’t seen the sister act.

Seventy-year-old Catholic nun Sister Dorothy Fabritze has made the circus her mission. She has spent 18 years in the church’s circus ministry, and for her, it’s a second calling.

The Catholic Church’s circus ministry dates back to the 1920s. A priest visits the traveling shows to celebrate Mass, but Fabritze of the Missionary Sisters of the Most Sacred Heart of Jesus lives and travels with the circus families, providing counseling and religious instruction. She says her most important role is a ministry of presence.

“And that’s really why I’m here,” she says, “I just want to live the Gospel message.”

In a checkered shirt and comfortable shoes, she wears a small cross around her neck and fits right in with the circus family.

And at a recent performance in the High Desert town of Palmdale, Calif., she pulled double duty as an usher. As sparkling sequined acrobats prepared to enter the center ring, Fabritze stopped to say hello to one half of the bow-and-arrow act. “She and her husband are just awesome. He takes a bow and arrow and shoots it at her, and she doesn’t move,” she laughs. “I wouldn’t do that.”

Fabritze does admit that performers tread lightly around her at first. “Do I make them nervous?” she asks. “You know, maybe in the beginning. Maybe they’re a little more careful maybe not nervous but more careful of their behavior or careful of the way they talk.”

For the past few months, she has been traveling with Circus Vargas.

Ingrid Silva, a 23-year-old flying trapeze artist, was a young girl when she studied for her first Communion with Fabritze. They had lost touch for many years — performers often travel with different circuses. 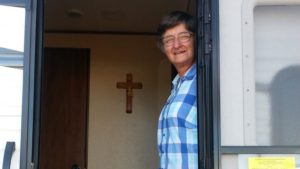 Fabritze of the Missionary Sisters of the Most Sacred Heart of Jesus lives and travels with the circus families, providing counseling and religious instruction. She says her most important role is a ministry of presence.
Gloria Hillard for NPR

“I was so happy last year when I saw her coming back,” Silva says. “I was in the ticket office selling tickets and I saw Sister Dorothy coming and it was so peaceful to see her.”

“We’re like a little town traveling without a ZIP code,” she says. “And Sister Dorothy becoming part of our family … we are very honored to have her here.”

“I always answered that question the same way from Day 1,” she says, “God told me to start and God will tell when it should stop.”

After the circus pulls up stake in Palmdale, Fabritze hitches her recreational vehicle to her pickup truck and drives back to Pennsylvania where she shares a home with her religious sisters. They eagerly await her arrival. “Some sisters are very interested in every little story I have,” she says.

And Fabritze does not disappoint.