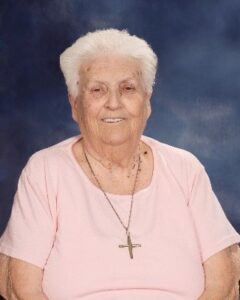 Sister Sylvia was born on New Year’s Day in Charleston, South Carolina, the only child of her parents. Her close and loving family were Southern Baptists with a deep Christian faith. Sr. Sylvia met our Sisters when she began working as an X-ray Technician at St. Mary’s Hospital in Athens, Georgia. Inspired by the witness of our Sisters, she converted to the Catholic faith and was baptized on November 18, 1961, in St. Mary’s Hospital chapel. She immediately became an active member of St. Joseph Parish and also attended daily Mass in our convent chapel where she played the organ.

As Sister Sylvia came to know our Sisters she felt more and more that God was calling her to be a Missionary Sister of the Sacred Heart. She was received as a candidate in September,1963. After her profession of vows in 1965 she was assigned as a Nurse’s Aide in our Motherhouse Infirmary where she helped care for our sick and elderly Sisters.

Sister Sylvia was a very dedicated and competent X-ray Technician. She served in that capacity in Sacred Heart Hospital, Norristown; Good Samaritan Hospital, Pottsville; and St. Mary’s Hospital in Athens, Georgia. Often she was given the very challenging cases that required her expertise.

For several years Sr. Sylvia took care of her aged and infirm Mother and a dear Aunt. Her father died when she was young and as an only child she accepted this responsibility, responding to the call to “Honor your Mother and your Father.”

Sr. Sylvia developed several health issues over the years and joined the Motherhouse community in 1995. For many years she served as the sacristan where she could display her special talent for decorating. She was always happy to help where needed in the community.
When Sister Sylvia needed more care than could be provided at Sacred Heart Villa she moved to a nursing home nearby. There she shared a room with our Sr. Catherine Crilly. As her health continued to decline Sr. Sylvia began hospice care.

On Wednesday afternoon the music minister from hospice played her guitar and sang many of Sr. Sylvia’s beloved hymns. With Sr. Theresa Molchanow and Sr. Catherine Crilly praying at her bedside Sr. Sylvia died peacefully around 2:30 p.m.

For the epitaph on her tombstone Sr. Sylvia chose: The Lord is my Shepherd, I shall want for nothing. May Jesus the Good Shepherd hold her close to his heart and lead her home.