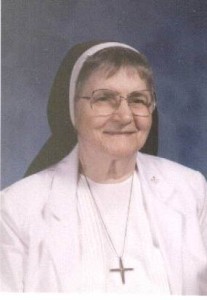 Sister Rose came to the United States as a child with her parents.  They settled with other “Burgenlanders” to work in the cement mills of Nazareth, Pennsylvania.  The Lechner family felt most at home, however, at Holy Family Parish, a church and school under the guidance of the MSC priests and sisters.  Just three years after leaving Holy Family School, Rose responded to a calling to enter the Missionary Sisters of the Sacred Heart, a calling she had, she said, “Since I went to school.”

At her first profession, Sister Rose was known as Sister Deodata, “Gift from God.”  For eighty-four years as a religious, Sister Rose was truly a gift from God.  Her life was one of compassionate service.  Soon after her first vows, Sister Rose travelled to Columbus, Ohio.  For eighteen years she labored there in food service alongside our Sisters who cared for the boys of St. Joseph Orphanage and the students of the Josephinum Pontifical College – a seminary for the “Church Universal”.

In 1946, Sister Rose began her labor of love at Sacred Heart Hospital in Allentown, Pennsylvania.  For twenty-five years, she supervised the hospital cafeteria.  Her staff knew that when Sister Rose told them, “St. Joseph is at the back door,” it meant that they were to give a homeless man a nourishing meal.

In 1976, Sister Rose began perhaps the ministry for which she is best remembered when she became pastoral visitor to the sick of Sacred Heart Hospital.  She began a new ministry at the age of sixty-nine, a ministry she had until the age of ninety-seven, providing hope and support to the sick and dying.  What a remarkable religious she was!  A co-worker once said, “To know Sister Rose is to know God better.”

When she retired in 2005 and returned to Reading, she was known for her active participation in the life at Sacred Heart Villa and the Motherhouse community, but especially for her long visits with “her Jesus” in the presence of her Eucharistic Lord.   Whenever she thought of dying and going to heaven, she delighted in telling us, “Just think of it; in heaven we will see Jesus!”

Even at one hundred and three years of age, Sr. Rose’s gradual physical decline was more visible within the last year.  In the last days, however, her increasing weakness revealed her approaching death.  Her transition from this life to the next came quickly and quietly.  She now delights in seeing Jesus eternally, the one she loved and served so well for so many years.