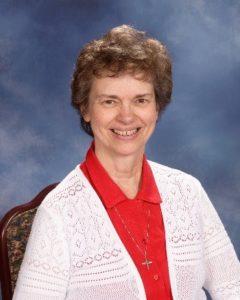 Sister Marianne was born in Gettysburg, Pennsylvania, and grew up in a loving and faith-filled family. She was the third of six children with 2 older brothers and 3 younger sisters. For several years her family lived in Arizona where she experienced people of different cultures such as Native Americans and Mexicans living together in peace and harmony. This influenced her openness and acceptance of all people throughout her life. Also, from childhood on, she had a love and appreciation of nature and the beauty of God’s creation. How fitting it was that she was born on April 22nd, the day we celebrate Mother Earth.

Sister Marianne came to our Aspirancy as a freshman in 1964. She entered the novitiate in September, 1968. This year she is celebrating her 47th anniversary of vows.
During those many years she taught every grade from one through eight in Pennsylvania parish schools in Reading, Nazareth, Philadelphia, Ottsville, and Coplay, in Palos Heights, Illinois, and in Athens, Georgia. Sr. Marianne also served as principal in elementary schools in Coplay, Nazareth, and in Moundsville, West Virginia. As a teacher and as a principal she was kind and caring and very creative especially when confronted with challenging situations. During her tenure as principal of Holy Family School in Nazareth, she oversaw the construction of an addition to the school while classes were in session. And when asbestos was discovered and the school building could not be used for a time, Sr. Marianne arranged for temporary classrooms in other places including the local Moravian Church. And she was able to accomplish this in two days so that the students were ready to begin classes Monday morning.

Sr. Marianne served in leadership as a provincial councilor from 1996 – 2005 and again from 2011 – 2017. During her first term on the council she began graduate studies at Loyola College in Baltimore where she received her degree in pastoral counseling. She ministered in several places as a family therapist since 2000. Sr. Marianne was a loving listener who helped many people when they were in crisis and felt most vulnerable.

After completing her term on the council which included 4 years as coordinator of the community at Sacred Heart Villa, Sr. Marianne returned to Naples, Florida where she had ministered previously in St. Anne School as an administrator and counselor.

Sr. Marianne became ill last month and was admitted to the hospital on April 13th. After several medical tests she was diagnosed with terminal cancer even though she had no symptoms until recently. Sr. Marianne made a valiant effort to not give in to the cancer while believing that “this is the ministry that God is asking of me right now – the ministry of suffering.” She began to receive hospice care on Monday evening and died peacefully Wednesday morning surrounded by her dear friend Sister Maureen, her sister Jacinta and her brother Tom. When I visited Sr. Marianne recently her last words to me were: “Tell the Sisters I love them and thank them for their prayers.”

The Mass of Christian Burial for Sister Marianne will be celebrated next week in our chapel at Sacred Heart Villa. She will then be laid to rest in our convent cemetery.