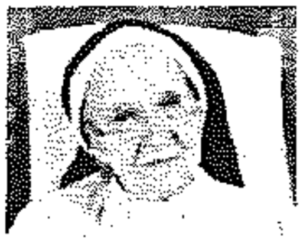 Shortly after beginning her postulancy in Hiltrup, Sister Stephana arrived in New York on the Steamer Bremen. The harvest was great in the United States, so a year after her first profession, Sister Stephana entered the field of teaching in the parish elementary schools of Pennsylvania. Education of God’s children, especially those needing extra help, became her work of love for the next fifty years.

As she herself advanced in age, Sister Stephana spent the next twelve years serving the elderly residents of the Knights of St. George Home in Wellsburg, West Virginia before her retirement to the Motherhouse in Reading.

Characteristically, Sister Stephana gave her “all” to whatever her Beloved asked of her. Illness gradually claimed her mobility and her ability to speak. She generously persevered in this condition of needing total care for many years. Her devoted attendant, Sister Magdolna, understood Sister Stephana as no one else could.

Sister Magdolna, reflecting on the death of her friend, said “Sister Stephana’s long life of 103 years was like a beautiful puzzle. The last piece, her brief stay in Orwigsburg, brought her life to completion quickly and peacefully. ”

We thank Sister Stephana for her silent and lasting eloquence.