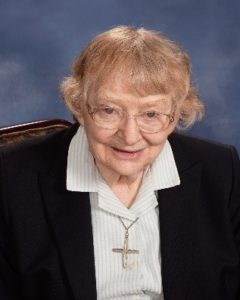 When Sister Noreen was a young child her family emigrated from Ireland and settled in New York City. She grew up in large loving family of nine children and entered our congregation as a candidate in 1947.

After Novitiate, Sister Noreen spent the next 18 years completing her university studies and serving as an elementary school teacher and librarian. She was missioned to our parish schools in Northampton, Haycock, Lansford and Coplay. For 8 years following this work, Sr. Noreen served as a Nurses’ Aide and lovingly cared for our Sisters at St. Michael Convent, now Sacred Heart Villa.

After this ministry, obedience called Sister Noreen to work as a librarian and office assistant in three of our parish schools. By 1999 Sr. Noreen again returned to the ministry of caring for our elderly Sisters. In the later years of her life she graciously accompanied our Sisters to doctors’ appointments and also served as assistant Sacristan at Sacred Heart Villa.

Sister Noreen was a quiet, simple, kind and prayerful religious woman. She dearly loved the Sisters in the Infirmary. Sister inherited her mother’s wisdom and quoted it often. She dearly loved her parents, her siblings and their extended families.

Sister Noreen had a great devotion to Mary and faithfully wore her scapular which remained with her until the Sacred Heart called her home.