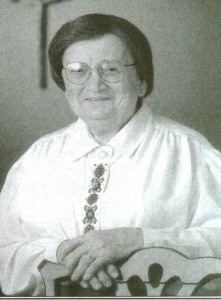 Sister Marguerite grew up in the home of her loving and hard-working parents who emigrated from Slovakia and found refuge among their countrymen in St. Michael Parish in Lansford, a coal-mining town in Carbon County, Pennsylvania.  Mr. Yech labored in the mines to support his wife and six children who were educated by our Sisters at the parish school.  It was there that Mary Yech first felt the desire to become a religious.

In 1936 she entered the aspirancy where she excelled in her studies and made her first profession in 1943.  Soon afterward, she became an enthusiastic and outstanding student nurse.  Following her training, she was entrusted with supervisory responsibilities in nursing at Sacred Heart Hospital, Allentown where she served there for fifteen years.

In time, Sister Marguerite would minister in all four of our hospitals.  She was the Director of Nursing Services at St. Mary’s in Athens, Georgia and Sacred Heart Hospital, Norristown.  After two years of additional studies, Sister Marguerite was assigned to Good Samaritan Hospital in Pottsville where she was the Director of Nursing Service.  In 1977, she established a Home Health Care Program in Pottsville which she directed for the next seven years.  Sister Marguerite then returned to Athens, Georgia where she served as the Home Health Care Coordinator and later as Pastoral Minister until her retirement in 2003.

Sister Marguerite touched the lives of many people in her 67 years as an MSC.  She was known in community as a woman of quick wit, one who had a hearty laugh, and did beautiful needlework.  I believe every one of our communities has a framed counted cross-stitch representation of our charism statement.  Above all, Sister Marguerite was a caring and loyal friend who looked after her Sisters in community and the poor whom she encountered in ministry.

Sister Marguerite was weakened by a serious illness in 2000.  After her return to Reading, she continued to decline.  During her last weeks, it was more and more evident that her death was approaching.  On the morning of January 22, in the presence of Sister Teresita and our nursing aides, Sister Marguerite stepped into eternity in anticipation of the new life that awaited her.