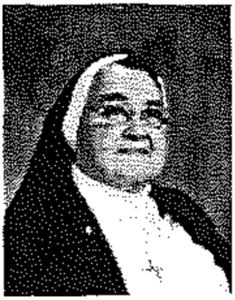 Just a week before her death, Sister Kathleen’s condition became critical. Rather than go to the hospital as she had done so often due to difficulty in breathing, Sister chose to remain at home in the care of the sisters and nurses. “One knows when it is time to die”, she told us.

Sister Kathleen was a woman of determination. As the oldest of thirteen children, she often had to make choices for her brothers and sisters. It seemed natural, then, that she would become an educator.

In 1953, Sister left for Papua New Guinea. For thirty-five years she taught at various levels, always ready to serve wherever she was needed: Malagunan, Lavongai, Kavieng, and Mongop. Later, she joined the staff of St. Peter Chanel Seminary in Ulapia. Her “boys” remember her with much affection. Sister’s talents were not limited to the classroom. Her culinary skills were well known. She would often relieve the cook or bake a cake on special occasions.

In 1988, Sister Kathleen returned to the United States for surgery. Later she did secretarial work in the Motherhouse infirmary until her retirement in 1996. Here Sister loved to lead the rosary before Mass. Her beautiful voice added much to the community’s singing. It was difficult for Sister Kathleen when, because of a breathing problem, she needed the help of oxygen and spent much of her last years in bed. Always, however, “she was the Lord’s”.

Sister Kathleen was a teacher to the end. Her witness of selfless sharing and filial love of Mary are a powerful legacy to us-her sisters, her family, and her countless students.