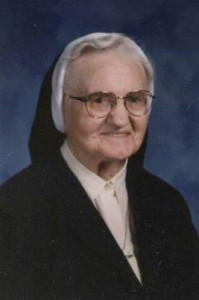 Sister Canice entered the aspirancy in Hiltrup in 1927 and began her novitiate in 1933.  She arrived in the United States on the Steamer Hamburg in 1935 as an eager, newly professed Missionary Sister of the Sacred Heart of Jesus.

For the next fifteen years, with the exception of one year for further study, Sister Canice taught grades one through four in Saint Michael Parish School in Lansford, Pennsylvania, a community of Slovak Catholics; in Saint John the Baptist School in rural Haycock, Pennsylvania; and in Our Lady of Hungary School in Northampton.

Sister Canice’s missionary spirit and availability to go wherever she was sent meant that for forty years, the rest of her life in active ministry, she adapted to different schools, grades, and positions of responsibility.  Until her retirement in 1993, she taught grades three through eight, was principal of Saint Joseph School in Limeport, Pennsylvania, returned to Saint John the Baptist in Haycock as principal and local superior, taught the older children at Saint Henry School in Philadelphia, and often returned as a teacher to the schools in which she previously served.

At the age of sixty-eight, Sister Canice became the coordinator of all religious education for the children attending public schools and later served as a librarian in two other parish schools.

In addition to being an outstanding educator, Sister Canice was a beloved member of every local community to which God invited her.  She was adaptable, not only to a new environment, but also to the variety of personalities in community. It was no wonder then that she was asked to be a supportive presence in the formation community for the two years before her retirement in 1993.