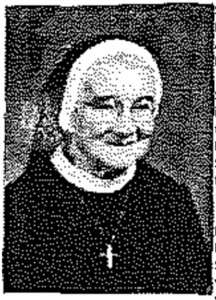 Sister Bridget was the oldest of eight children. Her parents, immigrants of Slovak heritage, enrolled Helen and her siblings in the parish school of SS. Cyril and Methodius Church in Bethlehem. Here she met our sisters and was moved to join the Missionary Sisters of the Sacred Heart. With the support of her loving and faith-filled  parents, Sister Bridget was received  as an aspirant in 193L

Like the women who attracted her to the religious life, Sister Bridget became a teacher and like our pioneer sisters in the United States, she would first teach the children of immigrants. After 11 years in two parish elementary schools, Sister spent the next 11 years at the secondary level. She was an excellent teacher. Her thorough and kind manner encouraged many young women to consider religious life.  She was truly loved by the aspirants whom she taught and guided.

From teaching, she was called to congregational leadership. After serving six years as a member of the General Council during Sister Clarita’s time as Superior General, Sister Bridget was appointed as the Provincial Superior of the U.S. Province. Her six-year tenure as provincial, 1966 – 1972, was a time of reflection and renewal, expansion and reorganization, experimentation and adaptation. It was a challenge that Sister Bridget met with characteristic faith and prayer.

She brought these qualities to the broader role of Superior General 1972 – 1984.  The letter from our present Superior General, Sister Mechthild, expresses well the  gift of Sister Bridget’s person and service to our congregation. She notes, “We pray with thanks for all she has done to help our MSC Congregation be where we are today.”

When Sister Bridget returned to the United States in April, 1985, she took up pastoral ministry among the elderly residents of the Knights of St George Home in Wellsburg, WV. She served as local superior there until our sisters were withdrawn in 1988. After a brief respite, sister worked as a receptionist at Sacred Heart Hospital in Allentown for two years before coming to the Motherhouse. Until her retirement in 1999, Sister served as the coordinator of a small group of elderly sisters.

The demands of service took their toll and Sister Bridget’s body began to weaken. Much of her day now was spent in prayer – prayer for her beloved congregation and family, and prayer for priests. Sister Bridget took a personal interest in everyone and was always open for a visit. She was a source of encouragement for many of us.

On April 28, Sister Bridget was admitted to St. Joseph Medical Center where sisters and family could visit and pray with her. She remained very alert and conscious; in fact, her last conversation with the nurse at 3:00 a.m. was about the meaning of our final profession ring. When the nurse returned to check on Sister shortly afterward, God was quietly calling her home. “Happy are you, Sister Bridget, who walked in the way of the Lord.”