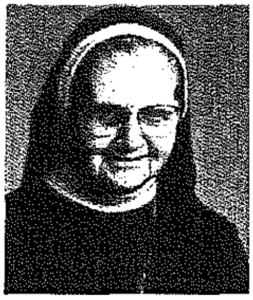 Sister Borgia’s parents arrived from Austria and made a home in the MSC parish in Nazareth, Pennsylvania. She was the fourth of ten children, three of whom succumbed to illness in childhood. These deaths brought young Mathilde and her family closer to God and the Church. Formed in an MSC parish and taught by our sisters, she resolved at a young age to become an MSC Sister. She never wavered in her desire. She once told us, “As I grew older, I became even more fervent in this goal.” Fervent describes her well!

Sister Borgia understood our mission as, “Wanting to lead all people to the love of the Sacred Heart by our dedication in service and ministry.” She truly lived our mission as a very faithful, prayerful, playful, resourceful religious and educator. Sister began her many years of teaching in a combined classroom of grades one through four in Sacred Heart School, Palmerton. She once told us, “I loved to teach the children music and singing. I used to have the children sing as they moved from one subject to another to keep them from misbehaving and it worked beautifully.” Music became one of her legacies.

Sister Borgia’s abilities were soon used at the secondary level, teaching mathematics at Central Catholic High School in Allentown and later in Mount Saint Michael, our aspirancy in Reading. While there, she also taught at the college level in an extension of Villanova University.

Many of us remember Sister Borgia as the principal and director of the aspirancy where she, for many years, had a formative influence on future MSCs. As a member of the Provincial Council, she helped build our present chapel and main building. She saw the need in 1965 to purchase a vacation house for the well-being of the sisters. She also guided many teachers and students as the Province’s supervisor of schools. We owe much to Sister Borgia. We remember her devotion, her strength, and her generosity.

Sister Borgia loved life: nature, music, needlework, and sports. Above all, she loved the Lord and His people.

At the age of 75, Sister Borgia responded to a need to teach English to our Korean sisters. It was difficult for her to leave Korea when cancer was diagnosed and surgery was needed. When her strength returned, she was sent to the Deep South.  There she served as a receptionist at Saint Mary’s Hospital in Athens, Georgia for ten years. In 1999, she retired to the Motherhouse where she contributed wherever she could and played the organ for the daily Masses.

Even when further illness sapped her strength and limited her mobility, Sister continued to participate in community activities. It was only in these last few weeks that Sister grew thinner and weaker. On the anniversary of our martyrs, she was called home in the presence of the sisters and her family.