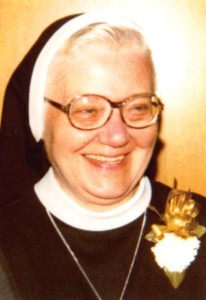 As a newly professed MSC, Sister Bonita arrived in the United States from Germany in May, 1931.  She left behind her parents, two sisters, and a brother who lost his life in the war soon after his priestly ordination.  This was a time of growth in our young congregation when new foundations were begun on three continents.

Sister’s long life of service in her newly adopted country began as a teacher of the German language and as the Motherhouse organist.  Her most beloved occupation was that of organist, “Since music could bring out the expression most needed on any occasion – joy at a moment of celebration, or comfort in a time of sorrow.”

For 55 years, in a variety of settings, Sister Bonita taught the children of grades four through eight.  Sixteen of those years were spent with the children of Sacred Heart Home in Coopersburg, PA.  She often served as the school principal and superior of the local community.  Several of her grateful students kept in touch with their former teacher, attending her 75th Jubilee and the celebration of her 100th birthday.

It was a joy for Sister Bonita to serve as the local superior for a group of retired sisters at Villa Saint Elizabeth from 1981-1987.  In 1991, she herself retired and reminded us that one never retires from being an MSC.  Indeed, Sister Bonita took seriously her ministry of prayer, presence, and patience.

For many years, Sister Bonita accepted the growing limitations of Parkinson’s disease.  Our late Holy Father, John Paul II, was her inspiration.  The need for special care prompted her move to a Catholic nursing home about 25 miles from the motherhouse.  Her readiness to accept this move at age 98 reflected the availability of our founder:  “What God wills, how God wills, as long as God wills.”  (Hubert Linckens, MSC)

Last spring, it became apparent that the Lord would soon call her home.  As we kept prayerful vigil at her bedside, we heard her repeat, “I am ready!”  Just before dawn on April 26, 2008, Sister Bonita rose to a totally new life in the Heart of God.