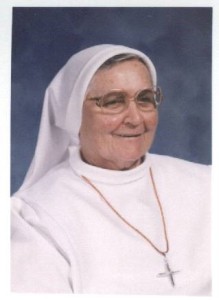 As one of seven children, Rose grew up in Allentown, Pennsylvania where our sisters taught in the elementary school of St. John the Baptist Parish.  Her devout parents gave their blessing when she asked to enter the aspirancy.  After completing her high school education in 1944, Sister Bernadette entered the novitiate of the Missionary Sisters of the Most Sacred Heart of Jesus.

Sister Bernadette was a born teacher.  With great enthusiasm, she accepted her first mission assignment as teacher of the second grade at St. Henry School in Philadelphia.  After further study, Sister Bernadette accompanied three other pioneers to Lebanon, Illinois, the first MSC Sisters to staff the new school in St. Joseph Parish there.  This venture, midway across the country, was a prelude of travel to much farther shores.

In 1956, Sister Bernadette set out for Papua New Guinea with Sister Mary Seibert (Sister M. Genevieve).  She was thrilled!  She spent most of her 42 years in PNG, teaching the mixed race children at Sacred Heart International Primary School in Vunapope and later in Kavieng.  As a teacher of the lower grades, she prepared the little ones for the sacraments.  The children and their families loved her.  Sister Bernadette was always able to find ways to help and encourage them.  As a member of the PNG Province, she served on the Provincial Council.  She loved her adopted country and its people. She inspired confidence in the local sisters with whom she was most generous and caring.

Sister Bernadette’s desire was to live and die in Papua New Guinea, so it was not easy for her to return to the United States in 1998 due to a debilitating illness.  In 2006, her divine bridegroom once again asked her to accept another move, this time to a nearby nursing home when her physical condition required it.  This difficult placement was made easier by the regular visits of the sisters and her family and the excellent care she received.

Accompanied by the sacraments, the prayer and presence of sisters and family, Sister Bernadette surrendered her all at 1:49 a.m. on July 31, 2009.  She now sees her bridegroom “face to face” and enjoys the company of all our former missionaries who served in her beloved Papua New Guinea.