“May songs of the angels welcome you and guide you along your way.
May the smiles of the martyrs greet your own as darkness turns into day.
Every fear will be undone and death will be no more,
As songs of the angels bring you home before the face of God.”

Sister Angela Tiencken loved angels and chose this song as one of the hymns for her Funeral Liturgy.  Today, on the Eve of All Saints, Sister Angela was welcomed home by the angels and led before the face of God. 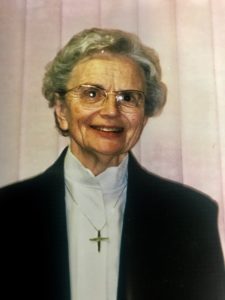 Sister Angela grew up in New Jersey very near to New York City where her father owned a paper company and her mother worked as his bookkeeper.  She was taught by the Sisters of Charity in elementary school and then came to our aspirancy, Mt. St. Michael High School.  She entered our congregation as a candidate in 1946 and would have celebrated her 70th anniversary of profession in 2018.

Sister Angela was a teacher for 17 years and taught the younger children in Kindergarten and Grades 1 through 4 in Reading, Philadelphia, Nazareth, Northampton, and Coplay.  She was a kind and caring teacher for God’s little ones.  When asked what she enjoyed the most about teaching, Sister Angela responded:  “The children were my delight.”  That was also very evident when she was assigned every summer during those years to help in our orphanage in Coopersburg.  She loved caring for the children “outside the classroom” where she was not restricted by lesson plans to be completed and strict schedules to be kept.

Sister Angela was a wonderful teacher but, deep in her heart, she felt a strong calling to serve God’s people as a nurse.  She had received a teaching degree from the University of Dayton in 1955.  In 1967, she attended Sacred Heart School of Nursing in Norristown and then went on to receive a degree in nursing from Georgia State University in Atlanta.  In the following years, Sister Angela worked as a nurse in our Motherhouse Infirmary, as well as our hospitals in Pottsville and Athens, Georgia.

During this time, Sister Angela also became a certified chaplain and ministered in pastoral care in Georgia and in parish ministry at St. Ann’s in Naples, Florida.  In her later years, Sister Angela cared for our elderly and infirm Sisters here at Sacred Heart Villa and at Seton Manor nursing home in Orwigsburg.  She was a loving and compassionate presence to all whom she met.

During this last week, when it was evident that Sister Angela was beginning her final journey, she was grateful for the care and kindness shown to her by our nursing staff and by our Sisters.  She welcomed visits from her nephews Tom and Jim and her niece Carol.  They were able to say their final good-byes to their dear Aunt.

The day before she died, Sister Angela was asked by one of her visitors if she was afraid.  She responded very simply:  “I trust Him.”  May that trust be rewarded as she begins her new life in Him.

The Mass of the Resurrection will be celebrated for her on Saturday, November 4, 2017 in our chapel at Sacred Heart Villa.  She will then be laid to rest in our convent cemetery.

United in His Heart,