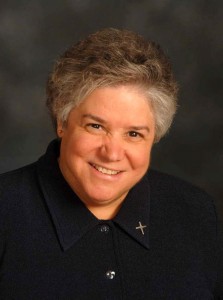 In her early years in elementary school, Sister Kathleen was taught by the MSC Sisters and it is from this association that she felt drawn to enter the aspirancy in 1964.

Sister served in various ministries in the Archdiocese of Philadelphia and the Diocese of Allentown:  as Pastoral Assistant at St. Francis de Sales Parish in Robesonia; Director of Religious Education at Holy Guardian Angels Parish in Reading; and since 1999, as Director of Religious Education and Pastoral Associate of St. Mary’s in Kutztown.  She also served as Vocation and Formation Director for our province for several years and most recently as Provincial Councilor.

Sister Kathleen was very well read on church and world issues.  She was in tune with the latest trends in religious and parish life as well as issues in society.  She was very interested and active in social justice matters.  She was in the forefront of issues relating to church and religious life and was very concerned about the future of the congregation and our province.

She was known for her ability to get people involved; for example, music ministry, prayer groups, etc.  She was wonderful at making connections and continuing them.  Although her outreach was all-embracing, she had a special gift in reaching the youth, be it in religious education classes, Scouts, youth groups, retreats, or parish functions.  For a number of years she was very involved with the SEARCH groups in the diocese.  The Office of Evangelization was very appreciative of her contributions and involvement in the diocese.  She was always interested in community affairs.  Sister served on the Board of Directors of Sacred Heart Villa and chaired the Centennial Committee that planned the 100th anniversary celebration of the United States Province.

Last year, shortly after she was appointed to the provincial council, she was diagnosed with a malignant brain tumor.  During the ensuing months, while recuperating from surgeries and treatments involving radiation and chemotherapy, Sister Kathleen remained positive and upbeat. She continued to go to council meetings and participate in various parish functions whenever her health permitted it.

During her periods of convalescence, she was a very positive influence on our nursing staff.  She really was the Heart of God in the world.  The staff of Sacred Heart Villa often commented how nice she was, how unassuming and appreciative of what they did for her.  No words of criticism ever crossed her lips.

When Sister Kathleen was received as a novice, she chose the name of Sister Margaret Mary.  How fitting that the Sacred Heart of Jesus called her home on the First Friday of the month, a day devoted to the memory of Christ’s appearance to St. Margaret Mary during which he first spoke to her of His Sacred Heart.