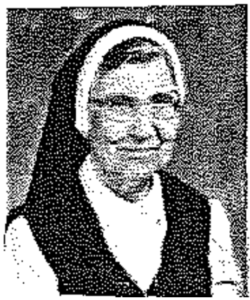 At the age of eleven, Julia arrived in America with her family on the steamer Red Line. They settled in northeastern Pennsylvania where many immigrants from Austria lived. Our sisters taught her in the parish school of Saint Peter’s Church in Coplay. She worked for several years in a clothing factory before entering the congregation, and was recognized for her quiet, industrious attitude.

Sister Julianna Marie trained as a practical nurse. During the next fifty-one years, Sister daily expressed the loving kindness of Christ in her healthcare ministry. She was an excellent nurse, very thorough in everything she did, yet very attentive and compassionate to those under her care.

She had many and varied experiences. For a short time, she did home nursing in Chester, PA. This was followed by many years of service at Good Samaritan Hospital, Pottsville, PA and St. Mary’s Hospital, Athens, GA where people still recall her loving care. Sister subsequently served as superior and supervisor at Mount Trexler Skilled Nursing Home, Limepo1t, PA; and then at the infirmary at St. Michael’s Convent, Reading, PA.

Until she retired in 1983, Sister Julianna Marie accompanied the senior sisters when they went to the hospital or to the doctor’s office.

After suffering a stroke several years ago, Sister lost some of her mobili1y; however, she never stopped being the caring nurse. She would often be found encouraging or assisting another sister at mealtime.

Two weeks ago, she was taken to the hospital after experiencing a seizure. Upon her return home, she began receiving hospice care. On Tuesday, a great change was noticed in her and she became unresponsive. The sisters began keeping vigil with her on Wednesday, awaiting the coming of her Beloved. Late that night, these Scripture words became reality for Sister Julianna Marie: “The Bridegroom is here! Come and meet him!”

We thank Sister for her caring presence and joyous smile.