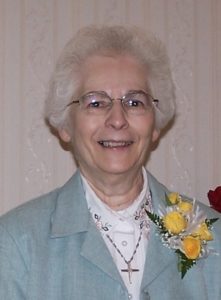 Sister Janet was the eldest of four sisters and two brothers.  Having discovered our community in a Catholic magazine, she entered our aspirancy, Mount Saint Michael High School, in 1952.

Sister Janet was an excellent elementary teacher. The children knew she cared about them and she was able to motivate them to work hard and to do their best. For eighteen years she taught in several parish schools in Pennsylvania: St. Henry’s, Philadelphia; St. Michael’s, Lansford; Assumption BVM, Slatington; St. John’s, Allentown; St. Cyril and Methodius, Coaldale; St. John’s, Haycock; and Holy Family, Nazareth.  Sister Janet generously responded to an emergency request to teach typing and business classes at Little Flower High School, Philadelphia.  She was there for seven years.  Sister was a member of the provincial council from 1972 -1976.  She was then asked to study and work in the area of finance and served as our provincial treasurer for four years. After this, as the administrator of our motherhouse, St. Michael Convent, she exhibited a good rapport with the staff and was excellent in organizational management.

In 1994, Sister Janet responded to a request from the National Religious Formation Conference and moved to Silver Spring, Maryland where she was the administrative assistant to the executive director.  After she completed her term of service there, Sister was transferred to St. Mary’s Hospital in Athens, Georgia, where she worked as the computer specialist assisting in all the offices throughout the hospital.

In 1998 Sister Janet was asked to come to the generalate to assist with various administrative projects.  One of her tasks was to reformat the constitutions when we incorporated the scripture passages and selected readings from Frs. Chevalier and Linckens. Sister also prepared the several reflection booklets in preparation for our congregational centennial.  On her return from Sutri in 2002 she took up the task of administrative assistant in Sacred Heart Villa.

Sister Janet always said she wanted to be a librarian and in 2007 she finally got her wish to serve as one in Our Lady of Hungary Regional School in Northampton for some years.

Sister Janet was a woman of many talents who served in various.  She delighted in all of them and accomplished them exceptionally well.  Sister Janet loved her vocation and was a fun person to have in the community.  She knew how to enjoy life and how to bring joy to others.

In 2010, Sister Janet retired due to the memory decline she was experiencing.  This came as a surprise to all of us, because if anyone kept her mind active throughout her life, it was Sister Janet.  When her physical and mental needs required more than the staff of Sacred Heart Villa could provide, she was admitted to Seton Manor Nursing home in Orwigsburg, Pennsylvania.

Charlene, was her constant companion.