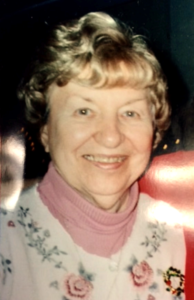 Sister Eileen grew up in a family of five brothers and sisters. She encountered the MSC Sisters at an early age since she was taught by them in Our Lady of Hungary Elementary School in her home town.  She entered our congregation as a candidate in 1945.  This year Sister Eileen would have celebrated her 70th anniversary of profession.

Her dream of going to the foreign missions was realized when she went to Papua New Guinea in 1987.  Here she was a Nursing Instructor in a mission hospital, the Sacred Heart Hospital, in Lemakot until 1990.

Upon her return to the USA she organized the MSC Lay Associates and served as their first director for seven years.

One of her greatest loves in ministry was the time she spent at Mary’s Shelter in Reading, a home for young pregnant, unwed mothers.  She served there from 1996 until the present, first as Program Director and, in the last years, as a consultant.

Sister Eileen was a woman of many talents who served generously in various capacities and settings.  She loved her vocation and was a fun person to have in the community.  She was a great story teller and loved to dance. She knew how to enjoy life and how to bring joy to others.

Sister Eileen was a two-time survivor of serious cancer surgery, 1999 and 2003. Since 2003, Sister Eileen has been living in Sacred Heart Villa.  It was only in the last year that her health and strength noticeably declined.  For her last few weeks Sister Eileen was in Hospice Care.  During this time she received frequent visits from her sister, Pauline, and a number of her nieces and nephews.  Sister Eileen loved her family and her family loved her.