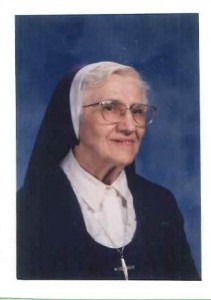 In the early 1900’s, Sister Catherine Ann’s parents came from Czechoslovakia and settled among other Slovak immigrants in the coal mining region of Pennsylvania.  It was there in Lansford that Sister Catherine Ann first met the Missionary Sisters of the Sacred Heart as her teachers in elementary school.

Sister Catherine Ann entered the aspirancy in 1934.  After her novitiate, she began her long career in the field of health care by receiving her initial training as a nurse in our own Sacred Heart Hospital School of Nursing in Allentown and later her degree in nursing at the University of Dayton.  A good number of her years were spent caring for sick children as the supervisor and clinical instructor in the pediatric department in Sacred Heart Hospital, Allentown.  She had a special love for children and some of the young patients that she nursed back to health remembered her each year on her birthday.

Sister Catherine Ann also used her excellent nursing and supervisory skills in Good Samaritan Hospital, Pottsville, Sacred Heart Hospital in Norristown, Mount Trexler Home in Limeport, St. Mary’s Hospital, Athens, Georgia and in our Motherhouse infirmary.  In 1980 she became involved in pastoral care and continued to minister to the sick and elderly in our hospitals.  From 1991-1997, she worked part time and served as receptionist in the short procedure unit of Sacred Heart Hospital, Allentown. Patients were happy and relieved patients to experience Sister’s kind and friendly manner as they came to the hospital for their treatments.

Sister Catherine Ann had a warm personality and was very friendly and outgoing.  People naturally gravitated to her to be touched by her kindness and love.  We are grateful for the many years that she lived among us and for the many people whose lives she touched.