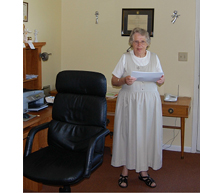 Stephen’s Place Sr. Virginia Longcope, MSC ministers to one particular group often forgotten and often begrudged even by the merciful of society; adult male prison parolees with a history of substance abuse. Sr. Virginia gained her inspiration for such a ministry from her experience with a 20 year old parolee, Stephen. He was truly alone; abandoned by family, and working for minimum wage, without transportation or a place to live, yet he was determined to remain sober and to attain his dream of one day becoming a pilot. The stresses of Stephen’s 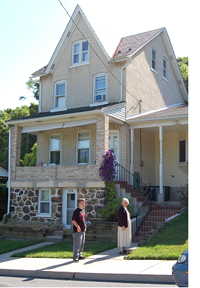 daily life eventually caused depression and hopelessness, and in his struggle, Sr. Virginia saw the birth of her mission; she would establish a house for men coming out of prison. In October of 1994, in Bethlehem, PA, Stephen’s Place officially opened its doors and began fulfilling its mission statement: to provide men coming out of prison with a safe spiritual environment in order to address early recovery issues from substance abuse as well as to develop personal life skills. Since 1994, Stephen’s Place has helped men transition back into the community as productive citizens. Sr. Virginia certainly believes that, “God has given me a gift to look at people and to see who they really are under the addiction. She teaches the men that “there is no recovery without God” and believes that she makes Christ’s love known by “creating a peaceful home.”

Stephen’s Place, a half-way house for men transitioning back into the community, was begun by Sr. Virginia Longcope, MSC in 1994. View the video below to learn more about the difference Sr. Virginia and Stephen’s Place are making in Bethlehem, PA.