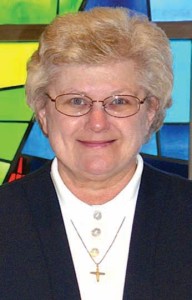 Missionary Sister of the Most Sacred Heart of Jesus Rosemarie Sommers finds joy in bringing Christ’s love and healing to people as a licensed massage therapist. (Photo courtesy Sister Rosemarie)

“God works in strange and mysterious ways,” said Missionary Sister of the Most Sacred Heart of Jesus (MSC) Rosemarie Sommers, who is joyful about sharing the healing love of Christ as a massage therapist with Care Through Touch Ministry.

Sister Rosemarie is serving in leadership on the MSC Provincial Council. The full-time position began in August 2011 and is a six-year term.

“Initially I thought I would have the opportunity to continue to offer massage therapy part time, but my ministry in leadership ended up to be full time for various reasons,” Sister Rosemarie said. “I am passionate about the Care Through Touch Ministry and will return to it full time when my term of office is finished.”

When Sister Rosemarie first entered religious life in 1965 she was educated to be a math teacher and a school principal, and thought that was how she’d be ministering her whole life.

But Sister Rosemarie found God had another plan.

“As a religious sister and a licensed massage therapist, I look at massage as the art of anointing, as a sacrament of touch, for it links one of the oldest and simplest of medical treatments with the ancient powers of ‘laying on of hands’ and ‘anointing with oil.’”

As she shared her life’s journey and how God has been present in her life and led her to where she is now, Sister Rosemarie recounted she was taught by the MSC Sisters at Holy Family School, Nazareth.

“When I entered our community that is what I thought I would do for 50-plus years as so many sisters before me. I did teach for 10 years and then was the principal of two schools, including St. Peter in Coplay. I loved teaching and I also enjoyed being a principal.”

The MSCs then asked Sister Rosemarie to be the formation director, and after that she served on the provincial council. During that time in leadership she was also provincial treasurer.

When Sister Rosemarie’s term in leadership ended she was given an opportunity for a sabbatical. “I participated in a sabbatical program at the School of Applied Theology in California, and it was there that I met Mary Ann Finch, the founder and director of the Care Through Touch Institute.

“I took part in a month-long program called ‘Caring Touch for the Elderly, the Sick and the Dying.’ I learned the basics of massage therapy and how to use it especially for older people and for those who are ill.”

Sister Rosemarie said Finch is a qualified massage therapist who went to India to work in a leper colony. When she arrived she was confronted with a group of women covered in scars and bandages. “She thought to herself, ‘My God, how can I touch them?’ She experienced a moment of terror.

“The director told her to put out her hand. One by one, the women gently took her hand and softly kissed it. That gesture removed her wall of fear. It was as if the women anointed her.

“After that Mary Ann went to Calcutta to work with Mother Teresa. From that simple, saintly woman Mary Ann learned that it wasn’t about massage therapy. It was about touch with love. Mother Teresa said, ‘We cannot do great things. We can only do small things with great love.’

“After a few months Mother Teresa told Mary Ann to return home and teach others what she had learned – to touch others, not with their hands, but with their entire beings. So began Mary Ann’s work at the Care Through Touch Institute.

“As a religious sister and a licensed massage therapist, I look at massage as the art of anointing, as a sacrament of touch, for it links one of the oldest and simplest of medical treatments with the ancient powers of ‘laying on of hands’ and ‘anointing with oil.’

“Hands are symbols of human service and communicators of the healing potential within. Oil is a biblical symbol of the divine gift of health, strength and respect for the whole person. In massage these symbols come together to comfort and strengthen the whole being. Massage as the art of anointing is a ministry – it is loving work through our hands.”

Sister Rosemarie said massage is especially beneficial to our elders who, due chiefly to the aging process, will experience more circulation problems, stiffness and pain in the joints. “Tactile needs do not seem to change with aging – if anything, they seem to increase. The elderly often have problems with their eyesight, hearing, mobility and vitality; problems that can make them feel helpless and vulnerable.

“It is through the emotional involvement of touch that one can reach through the isolation and communicate love, trust, affection, and warmth.

“Touching as a therapeutic event is not as simple as a mechanical procedure, or a drug, because it is, above all, an act of communication. The use of touch and physical closeness may be the most important way to communicate to acutely ill and elderly persons that they are important as human beings. It is especially in the aging that we see touching at its best as an act of spiritual grace and a continuing human sacrament.”

Since becoming a certified massage therapist in 2001, Sister Rosemarie has offered Care Through Touch to the MSC

sisters and to the residents and employees of Sacred Heart Villa, Reading, and a personal care home sponsored by the MSC Sisters. It is down the road from the provincial center, where Sister Rosemarie resides.

She also ministered at the Jesuit Center, Wernersville and at St. Joseph By the Sea Retreat House at the New Jersey shore, where she offered therapeutic massage to those who came for retreat or other weekend programs.

Sister Rosemarie said over the years she has received wonderful thank-yous from people she has touched through this ministry. One woman said, “Sister Rosie is such a kind and gentle soul that her presence is a balm to the spirit, a healing in and of itself. The massage is wonderful, relaxing and energizing, but it wouldn’t be the same without Sister Rosie.”

The daughter of an elderly client said, “I’ve been telling Sister Rosie for years that her massage therapy is truly a charism. She not only helps people physically, but also spiritually. She is a wonderful person, and a kind and gentle sister.”

Other comments include, “Thank you, Sister Rosie, for your openness to God’s spirit moving through you. I feel reverenced and prayed over” and “You were a touch of God’s love to me today. Thank you and bless you.”

Also, “Thank you so much for your gentle, loving touch – it was truly healing for me. The stress has really dissipated and my arthritis pain in the knee joints has also diminished” and “Your healing hands upon me were truly gifts of God to me this week and enabled me to accept God’s love for me in the fullest measure so far in my life.”

Someone else told her, “I felt very much the presence of God and his love through your gentle touch. The gift of your ministry is very powerful for it brings healing and dignity to the body as well as to the soul. I could feel your prayer as you worked and I also was open to God in prayer during the massage.”

A young man who had been sexually abused told Sister Rosemarie, “You have been a blessing on my birthday. Thank you for your sensitivity and healing compassion.”