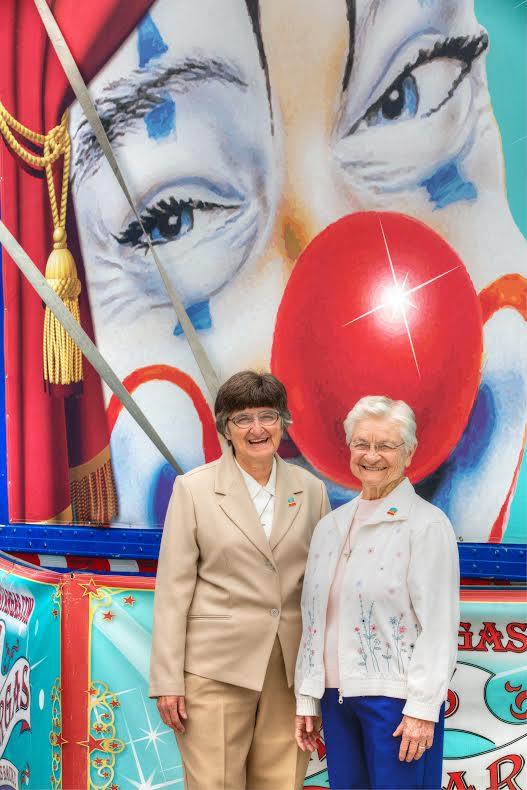 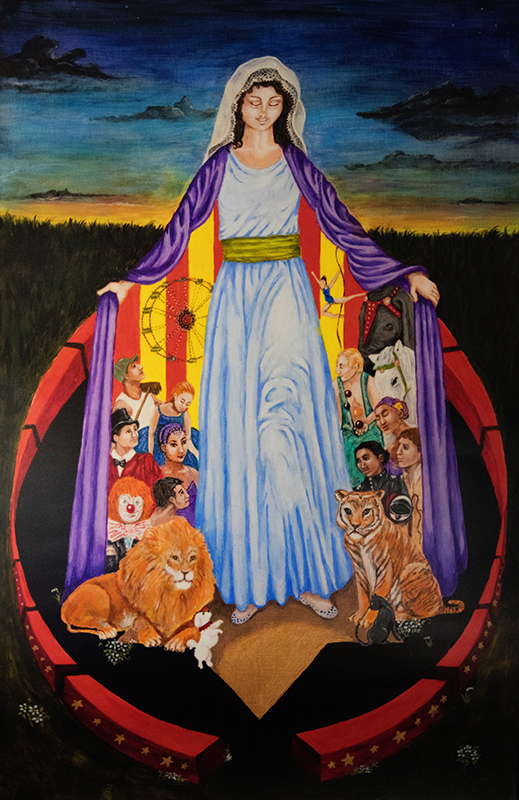 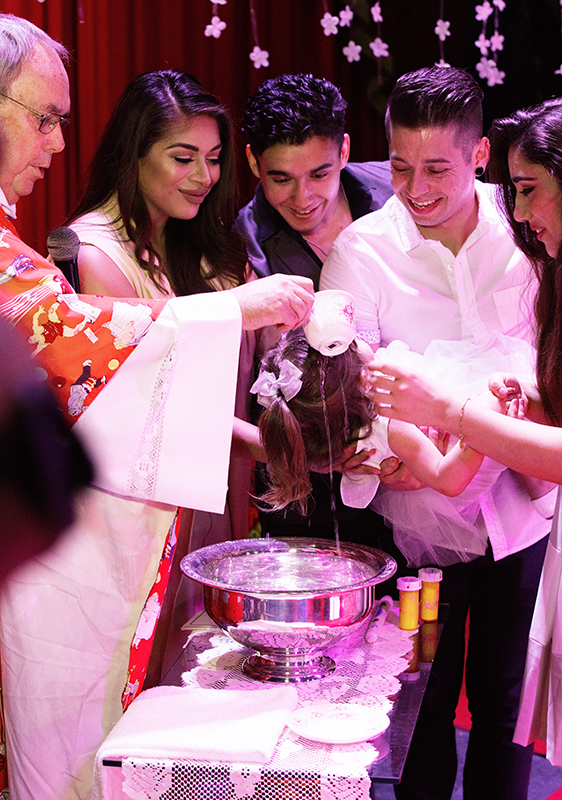 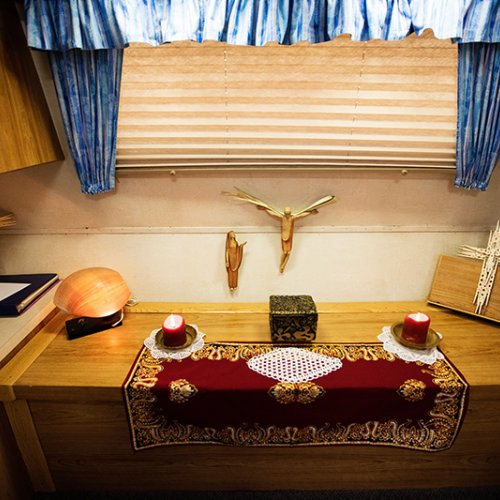 On May 19, a half-hour before noon, Sister Dorothy Fabritze came through the ceiling-to-floor drapes into the big blue tent. It was set up a week before in Burbank between the 5 Freeway and railroad tracks on Front Street.

The 68-year-old woman religious, wearing a pantsuit, was followed by six first Communion and four confirmation candidates and one toddler to be baptized, along with their families and sponsors. She had instructed them for the last nine weeks at Circus Vargas.

Forty-some members of the circus, sitting on high-backed chairs in the single ring right below the trapeze rigging, followed the group with their eyes. They walked around half of the blazing red decorated ring and then right down the center. Most were related to the first communicants — Aby and Calista Quenedo, Graciella Quiroga, Ivana Karamitreva, Luis Rivera Jr. and Sophie Marinelli — confirmation candidates — Angelina Quenedo, Antony Bachliyski, Ariyana Rivera and Daniella Quiroga — and the toddler Bianca Marinelli, who was held by her father, with her mother and godparents beside them.

Behind the makeshift altar with its six lit candles stood Father George “Jerry” Hogan in a red chasable embellished with strong men holding up dumbbells and a herd of clowns, giraffes, monkeys and elephants. Later, during his homily before administering the sacraments of initiation, the Boston native named by the U.S. bishops as one of the nation’s two active circus priests, declared in a booming barker voice: “This is a great day for Circus Vargas! This is a special day. The Church has come to you.”

The Church had truly come to Circus Vargas for the first time since it was bought and revived by former trapeze artists Nelson and Katya Quiroga in 2005. He is a fourth-generation member of the renowned Flying Tabares of Argentina; she’s seventh-generation circus from Holland and Italy. All three of their daughters took part in the Burbank liturgies: 8-year-old Graciella received her first Communion, 13-year-old Daniella was confirmed and 18-year-old Mariella served as sponsor and godmother.

“Well, for us it’s a big deal having Sister Dorothy and her helper, Sister Mary [Seibert], here,” said Nelson sitting at a table during the reception after. “They make us feel very special, because beautiful people like this come and spend time with you and prepare your kids for something so important. It’s really hard for us, you know, going on the move all the time to have a place to do all this.”

Katya was nodding. “And also to bring God within the circus brings a certain amount of peace and brings all the families together,” she pointed out. “It makes everybody understand more about the Church.”

When asked if the women religious fit in, she said without hardly thinking, “Oh, yeah. Because they go to a lot of different circuses.”

About preparing their daughters, both agree the nuns did a wonderful job.

“Oh, amazingly well,” Katya said. “The kids really felt like, ‘OK, this is something important. It’s something that really matters to understand what God’s all about. So we’re very happy with that. It has made a difference in how they perceive the world.”

Now Nelson was nodding. “Learning about God is serious, and that’s been shown by the sisters,” he said. “That’s been translated to the kids very well. I don’t know how they did it. I was asking them, ‘How did you manage to have these kids take something so serious?’ My daughters took it, like, so serious. Unbelievable. We couldn’t have done it.” And he looked at his wife.

“Exactly,” she said. “How they presented God and the sacraments. They had the kids do some art projects and fun things. But that’s how you learn, you know.”

And the former flying trapeze stars exchange another glance “Actually, we were just talking the other day that now it’s going to be boring without them,” he said with a chuckle. “They did a lot for our kids’ lives, so that affects us, too. So we’re going to miss them tremendously.”

The feeling is mutual, according to Father Jerry, as he likes to be called. The Boston- and Sarasota, Florida-based national circus chaplain heads up two related ministries. Circus and Traveling Shows raises money for the sisters’ ministry. He and Sister Dorothy conduct mission appeals in U.S. dioceses, including Los Angeles. There’s also a retirement project that has bought land for and supports circus families.

He remembers when Sister Dorothy called him 18 years ago after reading a Circus Ministry brochure. She was in Texas, raising money for the Missionary Sisters of the Most Sacred Heart of Jesus. When he tried to discourage her by playing up the grind of the on-the-road lifestyle, she simply returned, “Oh, I’m used to traveling.”

“She’s fabulous,” he said, taking off his chasable after celebrating Mass and presiding over the baptism, first Communions and confirmations under the big top. “She fits in really well. She understands the people, and she fell in love with them, naturally. And they’re great people.

“You have to understand they’re always traveling. That’s not a stress for them. So you have to adapt to their life. You have to roll with the punches. And sometimes the image of the Church and nuns, especially, is very strict and rigid. You’ve got to throw all that away. You’ve got to sit there and say, ‘Where are these people at?’ And when you find out they’re just like everyone else, they’ve got a depth of faith, you say, ‘God loves you.’ But you just don’t say it. You experience it, so they know it.

“They do the grunt work,” he added. “It’s unbelievable. Any show they’re on, I come there and it’s: ‘Jerry, these are the people you’ve got to see today.’”

The first thing Sister Dorothy wants to show you is the trailer she and Sister Mary live in. It’s parked in back of the blue tent with the others — a 30-foot-long white Coachman Travel Trailer, Catalina model, pulled by a 2008 Chevy Silverado pickup truck with over 325,000 miles on the odometer. “This is where I have lived full time for 17 years,” she quipped, walking up the narrow, shaky steps.

And inside, the first thing she pointed out taking a sharp right is the chapel, which was the master bedroom. There’s a small boxy tabernacle resting on a wood chest covered partly in red velvet with braded edges. In front are two rose-purple stubby candles. Hanging on the wall behind is a crucifix. Nearby is a statue of the Blessed Mother with her left arm raised. The feel is intimate and sacred, with two soft-cushioned chairs for worshipers.

“The ministry is a ministry of presence before anything else,” said Sister Dorothy in a no-nonsense, separating-every-word voice that must have served her well as an elementary school teacher and probably, too, as a missionary for 16 years in Papua New Guinea. (Sister Mary, 84, served in the Oceanian nation for 43 years.)  “Our first job is to live with these people. It always takes time, because we join a circus and we’re all strangers. But we form relationships first. That’s our first evangelization. We are a witness to a Christian Catholic lifestyle.”

For the first 14 years of her circus ministry, she held down paying jobs, starting on crews putting up tents. Later she moved on to selling tickets and souvenirs, and being part of prop crews. Before and after working hours, she managed to fit in one-on-one counseling, Bible study, marriage prep plus first Communion and confirmation instruction along with RCIA (Rite of Christian Initiation).

Then after taking a year sabbatical in 2011, she started something new — identifying, training and supervising lay leaders during three-month stays with different circuses. Right now these leaders, some of whom are catechists, are in six circuses, including Circus Vargas. She stays in touch with them by phone and Skyping when she’s not writing grants for funds.

The only thing she’ll say about the challenges of circus ministry is how they’re the same as in any parish. “People worry about their children and about their houses, which are called trailers and motor homes,” she reported. “They worry about their jobs. Job security is not easy to come by here. They’re constantly trying to improve their performances. They have to be creative producing acts. But I’d be hard pressed to find something that they worry about that other people don’t, you know.”

It’s the joys that have kept Sister Dorothy Fabritze coming back for another season with clowns, acrobats and trapeze artists.

“Absolutely, or I wouldn’t be staying,” she said. “I stay because I’m a Missionary Sister of the Sacred Heart. Our charism is to convince people that God loves them. And we are to do it with those who have not heard the message, refuse to hear it or just have never been presented with it.