Sr. Barbara Winkler, MSC of the United States Province has been elected by her peers as the 9thGeneral Superior of the International Congregation of the Missionary Sisters of the Most Sacred Heart of Jesus.

For the past six years, Sr. Barbara has served as a Councilor on the Generalate Leadership Team. Through membership on this international team, Sr. Barbara has experienced intercultural community living in Italy where she will continue to reside with sisters from Germany, Namibia, Korea and Spain. As a Councilor, Sr. Barbara has had opportunities to visit MSC sisters worldwide getting to know the sisters’ life and mission and offering assistance and support to them along with the other leadership team members.

Now, as her Congregation’s General Superior, Sr. Barbara will expand her role in an effort to remain faithful to the spirit of the Sisters’ founder, Fr. Hubert Linckens, MSC who reminded them that “For this Heart you are in the midst of the world.” Under her direction, MSC sisters will continue to minister among the poor and disenfranchised and to venture beyond their borders to more countries where they will begin new missions in response to the needs of the day. Even today new beginnings and foundations are being undertaken in the midst of the declining resources. 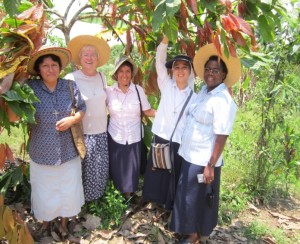 Sr. Barbara (2nd from left) with MSC Sisters on the way to visit a family in Pangoa, the jungle area of Peru. 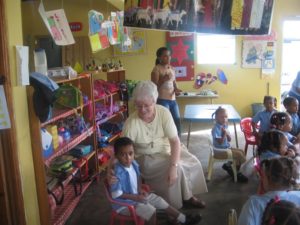 Sr. Barbara befriends a child in the Dominican Republic.